Our Advice Line is open on Mondays, Tuesdays, Thursdays: 9:30am – 1pm, 2pm – 5:30pm; Wednesdays and Fridays: 9:30am – 1pm.
Anyone in need of advice outside of those times can reach us via our contact form and we can make arrangements for call backs.

By Rick Borges Head of Assessment, Banking Standards Board

I recently attended a leadership training course where one of the exercises was about listening. I had to listen to a colleague talking about an issue for 20 minutes with no interruption, maintain eye contact the whole time, demonstrate engagement through my body language and absorb the information to be able to discuss the issue at the end of the allocated time. It was a revealing exercise for me. After five minutes I was itching to ask questions, share my own experiences, suggest solutions to the issue or move on to the next exercise. Twenty minutes felt like 20 hours. I discovered that listening is hard!

We all know, however,that listening carefully may help us to understand others better and to deal more effectively with their concerns or issues before they become major problems. People are much more likely to share and speak up about their concerns if they feel listened to or see others being listened to and taken seriously. So, as a leader, are you listening to your employees’ concerns in order to promote a good speak up culture?

Results from the Banking Standards Board (BSB) Employee Survey in 2018 showed that less than half of banking employees (42%) who said that they had spoken up about their concern in the past 12 months felt that they were listened to and taken seriously; 40% said that they were not (with the remainder unsure). At the City of London breakfast briefing ‘Fostering a positive speak up listen up culture’ held this month, Kate Coombs, our Senior Behavioural Scientist and one of the speakers, said: ‘If firms are to create environments in which people feel able and encouraged to speak out, they need to focus also on how they respond to challenge and feedback when it is offered. The act of listening is what can make or break a ‘speak up’ culture’

Creating and fostering a speaking up culture, where listening is key, is not a challenge unique to the banking sector. At the breakfast event, delegates from banking, building societies, manufacturing, transport and retail amongst other sectors, shared similar challenges. Francesca West, CEO of leading whistleblowing charity Protect, told delegates that 93% of organisations tell Protect that they have a whistleblowing arrangement in place, but employees often feel these are ineffective.

Francesca shared with delegates details of Protect’s 360 Benchmark, a tool to test the effectiveness of whistleblowing arrangements, highlighting strong and weak areas for organisations.When blowing the whistle or raising an issue, the type of concern – such as organisational issues (e.g. actions not in the best interests of customers, ignoring internal policies and procedures and actions that damage market integrity) or personal concerns (e.g. bullying, discrimination and sexual harassment) – may also be relevant to whether or not people feel listened to and taken seriously. In the BSB Employee Survey, when employees did speak up, they were most likely to say that they had felt listened to and were taken seriously when their concern related to sexual harassment (57%). For all other concern types, 50% or less reported that they had felt listened to, with concerns related to discrimination as low as 28%, as the chart below illustrates.

Employees experience of feeling listened to, by type of concern 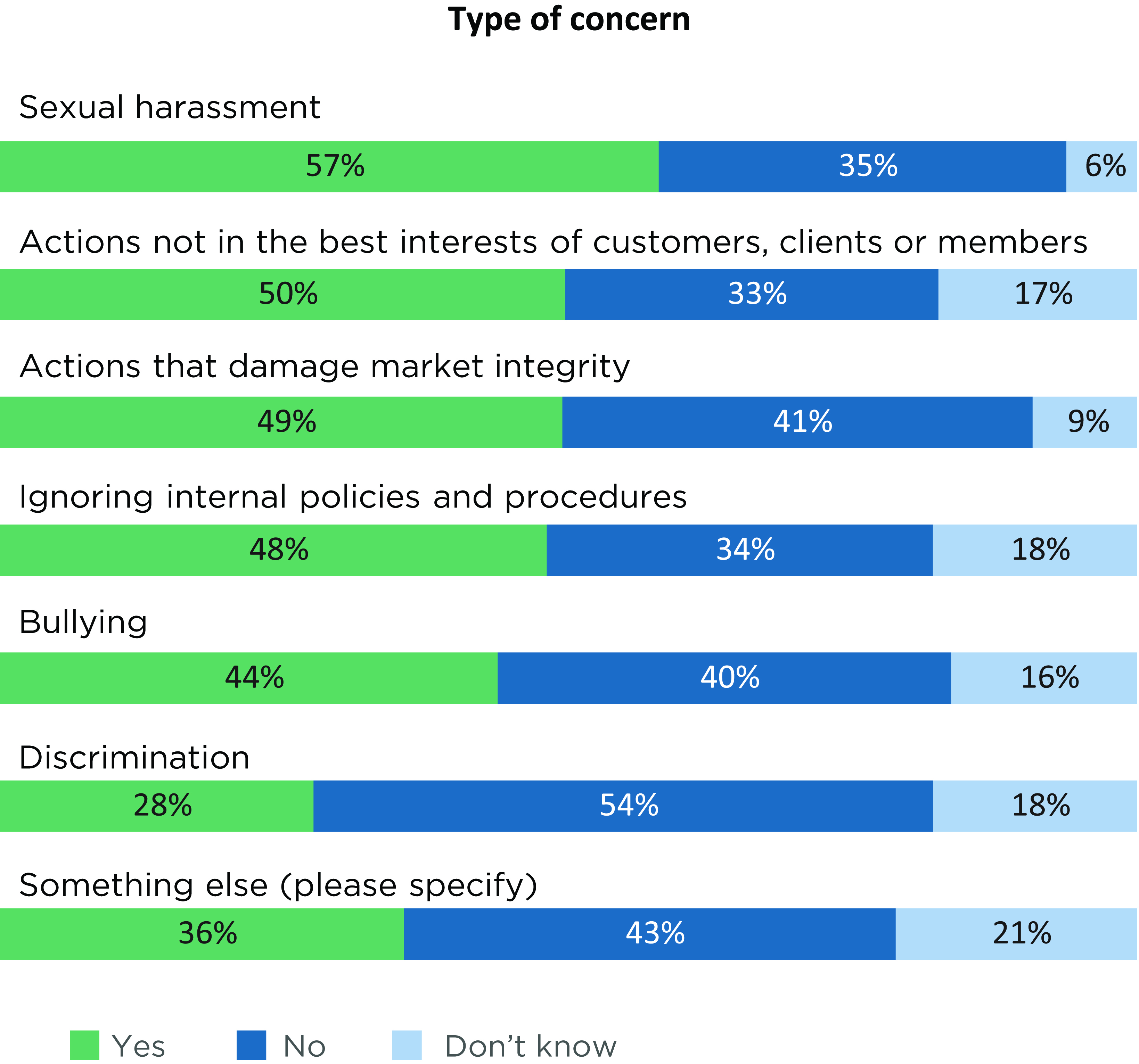 The BSB survey identified fear and futility as the main barriers to speaking up. Individuals who had wanted to raise a concern had sometime snot done so because theythought either that it would be held against them or that nothing would happen if they spoke out.Being seen to listen is particularly important in cases of the latter. In some business areaswe observed that there was a mismatch between perception and experience. Employees had not spoken up because their perception was that it would be futile to do so, but the experience of those who did speak up was often a positive one.Where this is the case, firms should—as well as continuing to ensure that those who speak up feel listened to —also focus on how to communicate and share the positive experiences of speaking up, in order to encourage others to do likewise.

Rick has senior responsibility for the BSB annual assessment of culture, behaviour and competence across member firms.

We use necessary cookies to make our site work. We'd also like to set optional analytics cookies to help us improve it. We won't set optional cookies unless you enable them. Using this tool will set a cookie on your device to remember your preferences.
Necessary Always Enabled
Necessary cookies enable core functionality such as security, network management, and accessibility. You may disable these by changing your browser settings, but this may affect how the website functions.
Non-necessary
We\'d like to set Google Analytics cookies to help us to improve our website by collecting and reporting information on how you use it. The cookies collect information in a way that does not directly identify anyone.
SAVE & ACCEPT